Introduction – The struggles of the riders in Myanmar

On 16th of March 2022, the management of Foodpanda, subsidiary of Delivery Hero in Myanmar, announced huge cuts in wages, decreasing the minimum guaranteed payment per delivery. The riders reacted immediately, they logged off their app’s accounts and through direct-democratic processes they self-organized their resistance and proceeded to go on strike. During the first three days, about 90% of the workers who suffered the unjust pay cuts participated in the spontaneous mobilization.

We point out that about 9.000 riders work for Foodpanda in Myanmar, 7.000 of which in Yangon, which is the biggest city in Myanmar.

On 19th of March 2022, in an attempt to calm things down, Foodpanda announced that pay cuts were the result of a technical error. The next day the riders met with the management of the company, however the negotiations didn’t lead anywhere, and for this reason the workers are taking again the path of the struggle… (source: myanmarlabournew.com)

The working reality of riders in Myanmar.

We point out that Foodpanda, in full compliance with the military dictatorship that haunts the country, forbids the riders:

The basic demands of the riders are:

* Insurance coverage for all riders which means: health insurance and insurance for the vehicle (bike, motorbike or car/van).

* Distance’s calculation base on the actual kilometres travelled: at the moment, the amount of money given as compensation for gas expenses, use and maintenance of the vehicle, is calculated through a straight line that goes from the point of the pick-up to the place of delivery. However, riders are not digital data that circulate inside the app of the platform, but real workers that drive every day along the streets of the city. The compensation should then be based on the real kilometres travelled, and not on a false line drew by the digital application.

* One paid rest-day every week.

* Democratization of the authoritarian regulatory framework of the application.

* A hotline for communicating with the company in case of emergencies that can arise during the working activity.

* To inform the riders a week in advance regarding any changes made by the company.

In Greece, in Myanmar and all over the world, the reduction of the cost of labour increases the profits of the multinationals.

Foodpanda it’s the major subsidiary of Delivery Hero in Asia. The german multinational Delivery Hero with headquarters in Berlin, predicted for the year 2022 revenues from 9,5 to 10,5 billions of euros. (source: nasdaq.com).

Being a rider under the iron heel of the military regime.

“Security forces are almost everywhere in Yangon. You never know what will happen next. I am very concerned about the situation on the streets. However, I have to work. I will bypass all checkpoints whenever I see one. We are working under immense duress”, said Min Min worker of Foodpanda. Also, according to reports, the men of the security forces steel the deliveries and the cash from the workers.

“If an order is looted by security forces, I would have to pay for the order myself, but I can’t afford to pay it”, said Min Min adding that the support of riders from the company is totally insufficient to say the least.

As a union we support the struggle of our colleagues in Myanmar that starts on 6th of June 2022, challenging the boot of the military regime, against the exploitation and the oppression of the digital platform Foodpanda, subsidiary of the german multinational Delivery Hero.

Public gathering for international solidarity outside the offices of efood (subsidiary of Delivery Hero in Greece), on Monday 6th of June 2022, at 10.30 am, L. Irakliou 409.

Base Union Assembly for Bike and Motorbike riders (S.V.E.O.D.). 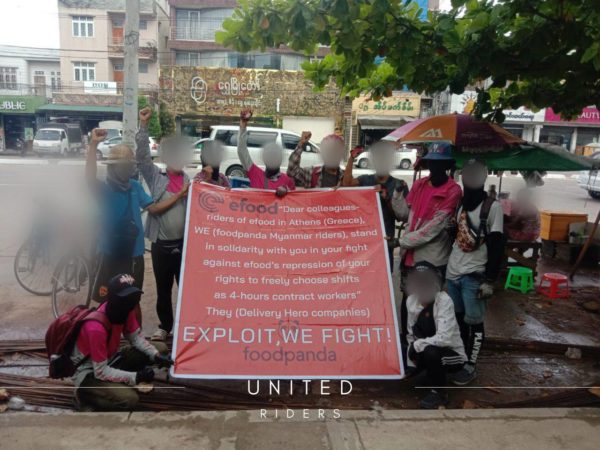 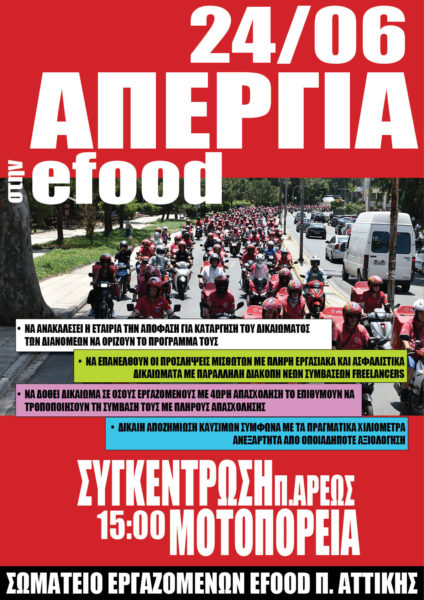