Home » Campaign of economic support of the Base Union Assembly for Bike and Motorcycle Riders (S.V.E.O.D.) 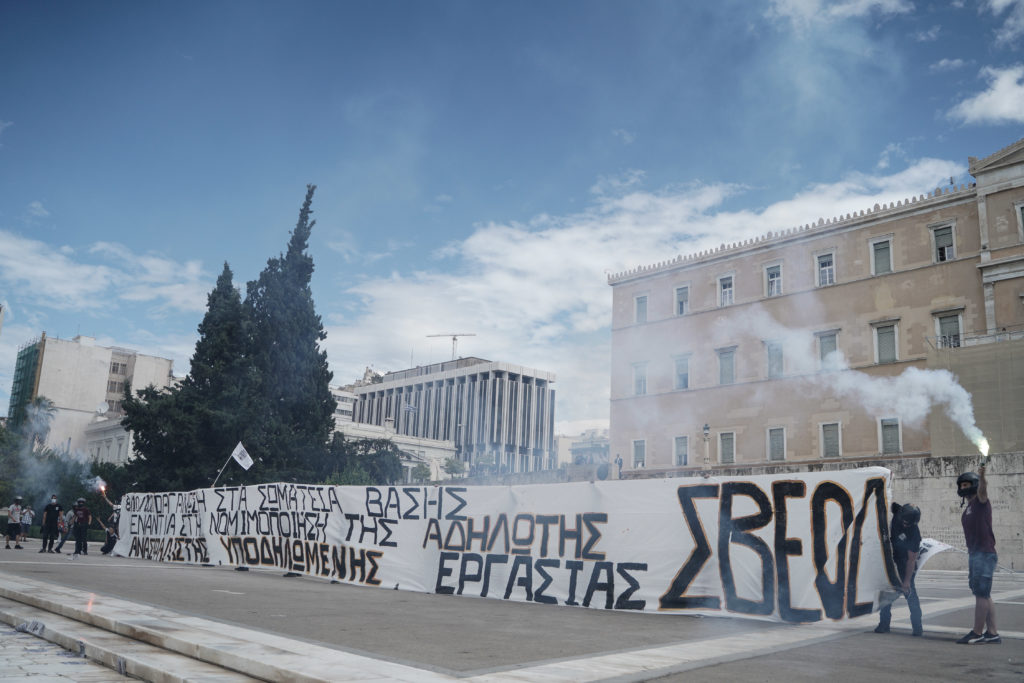 Campaign of economic support of the Base Union Assembly for Bike and Motorcycle Riders (S.V.E.O.D.)

To all our members and colleagues

To all the people that support our struggles and get inspired by them, that smile when they see our motorbike demos, that feel victorious for every single one of our victories, that embrace Base Syndicalism

After 15 years of existence our union is now starting a campaign of economic support. As a matter of fact, we should admit that not all of our members are rigorous in their financial obligations. But even if they were, there are a series of factors that put us in a suffocating financial position and that we will describe in this open call, which drove us to the decision of starting this public campaign of economic support.

Two years of lockdown revealed the true face of a neoliberal state: authoritarian, anti-labour, anti-social. Even the social, political and cultural events were targeted by the government and many were banned under the pretext of coronavirus. At the same time, public spaces (universities, parks, squares) were turned into private spaces, without free access, while brutal repression often accompanied and guarded this “unconstitutional deviation”. In this context, in September 2021, a planned event for the 14 years of S.V.E.O.D. which would also be followed by a economic support bar, was banned by the police with two anti-riot police vans.

The two-year lockdown brought the profession and the union to the forefront. The needs and obligations multiplied, as well as the fronts for struggle and intervention. At the same time and due to the lockdowns, the sudden appearance of digital mediation companies (platforms) like Wolt, efood, Rocket, BOX, also took place, which opened up a new huge front of struggle. The assembly was constantly faced with new facts, it had to analyse and strategize, always trying to be one step ahead. Not only did this situation left us no time to plan other type of events or financial support activities, but we proceeded to print a series of publications that analyse, interpret and suggest ways out of the bosses’ policies.

S.V.E.O.D. often advances through months-lasting campaigns, whether to organize a strike or not. We do this not only to give ourselves the necessary time to inform as many colleagues as possible, but also to socialize our struggle and connect with other parts of the working class. These campaigns, in addition to the burden they represent both at a personal level and for the assembly as a whole, also require a huge economic cost. And this is especially true in the last year, when the prices of the raw materials have skyrocketed while the wages are more and more devalued. For example, the cost of production of our newspaper that we consistently publish and distribute in the food courts and courier companies has doubled.

Often, colleagues may need economic support in order to proceed with a lawsuit, especially when a labour dispute or a struggle breaks out in the workplace. S.V.E.O.D must be on the side of these colleagues. At the same time, it happens that the union or just single members of it, receive complaints from employers of all kinds accusing us of having ruined their business. Accusations that aims to silence us and destroy us financially.

The union played a key role in the victorious struggle against efood in September 2021. The entire society in struggle was uplifted when a multinational giant was forced to its knees by a sea of ​​workers. The motorbike demos were applauded by all passers-by unanimously. From this society in struggle, many contributed to the victory. Through the struggle, S.V.E.O.D and base syndicalism came to the fore. The assembly proceeded to publish a pamphlet on base syndicalism, as well as to organize a series of events in Athens, in the rest of Greece and also abroad (Italy). Also, with the organization of the International Strike of the 1st of May 2022, as a union we pursued the effort of connecting with our colleagues globally with the goal of creating a horizontal international network of workers in platform companies. Efforts that we don’t want to see bogged down because of our financial situation, but instead we want them to flourish on the global soil of resistance.

We therefore appeal to all of you to assist us in the financial support campaign of our union, being aware of course of the difficult economic situation of each and every one of you. A campaign which will include the printing of coupons of economic aid that will be distributed by our members, as well as the organization of events for this specific purpose and publications like calendars/agendas for financial aid.

Solidarity – Unity at the Base – Self-organization

We are the storm in the eye of the cyclone

From struggling in the streets, to the street of the struggle